This is an Ansible role I use when I provision new servers, the role add my SSH key, and disable remote root login, password loginm and GSS login to secure down the SSH server and then restart it.

And in the handler section of the role:

Recently, externally accessed SSH server running OpenBSD was firewalled because the infrastructure guys at my employer think SSH is insecure!

On a side not, the reason behind this is a constant brute force attack targeting this server for the past several years, the attack was unsuccessful, password access is disabled in the first place, they refused to give us real IP to disable them at the PF level and they refused to firewall offending IPs, but anyway the attack was unsuccessful because no password authentication was enabled.

I had to secure another method of accessing the server to be able to continue my work along with the team, I installed recent OpenBSD 5.8 snapshot and started to configure it as permanent reverse SSH server. 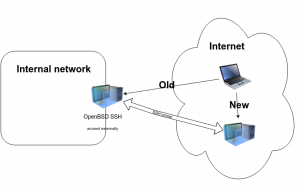 Old method:
– OpenBSD server was given public IP, we used to access it directly from the Internet.

For the purpose of this exercise, I installed new OpenBSD server inside our internal network, OpenBSD 5.8 13-October snapshot, and performed the following:

This setup port 2015 on the external SSH server, when connecting to that port it will direct traffic to other end originating the SSH tunnel (OpenBSD server – Local host in this case) and to port 22 (SSH port).

6- Check the service is running OK

7- Check the service is running from command line:

8- Now connect to the internal OpenBSD server through the external SSH server:

And I was able to access the internal OpenBSD server.